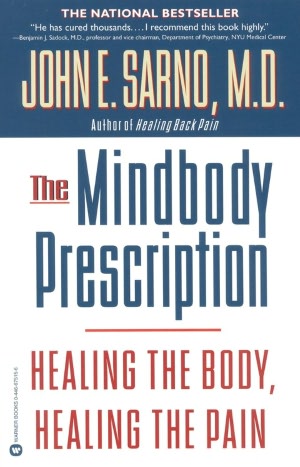 Let me first start out by saying that I have long been a skeptic of the assertion that RSI is a condition solely controlled by the mind. I can attest to the fact that it’s certainly not just imaginary pain. So it was with a somewhat critical eye that I started reading the book, ‘The Mindbody Prescription’ by Dr John E. Sarno. The book has been available for a while, from 1998, but is nonetheless relevant today.

What drew me to finally read it was the one or two comments on this blog referencing it as having helped in dealing with RSI, coupled with a previous awareness of the book a few years ago.

The book is about a condition that Dr Sarno calls TMS (Tension Myositis Syndrome) which describes how there exists an ability in one’s mind (unconcious) to restrict the flow of blood (causing mild oxygen deprivation) to tired or injured areas which in turn causes those areas to stay continually sore, weak and painful (although not permanently damaged). The author states that the mind wants to create the pain as a distraction from other emotional/psychological conflicts or trauma that exist in the unconscious and have been repressed, perhaps things that happened a long time ago (eg as a child). If the issues in the unconscious mind were allowed to come forth, there would be an emotional mess in the concious mind. The unconscious mind therefore keeps a lid on these issues, and diverts one’s attention with pain which is focused on the body as opposed to the mind.  “The role of pain was to divert attention from frightening feelings” , as he puts it.  He states that it is only after confronting these issues, and accepting that you have emotional issues (“inner rage”, as he calls it) that need to be brought into your conscious and dealt with, that you can finally get over the masking symptoms, ie your pain. He attributes this process to causing all kinds of pain including back, neck and shoulder pain, as well as RSI conditions, other myofascial pain type conditions, back pain, and many others ranging from sciatica to tennis elbow and even cancer.

Dr Sarno also claims that the experience of continual pain can lead to the creation of an ‘inner rage’ which can be self-fulfilling, causing more pain. In his experience, the people who are more susceptible to this are the more conscientious workers who always strive to do their best in their jobs and life (ie perfectionists). This compounds their inner rage because it is impossible to live up to their own expectations of themselves. I can also admit to somewhat fitting this psychological profile.

He claims that treating this type of condition  physically (eg via physiotherapy) is a waste of time and that  any benefit is purely a placebo effect.

He recommends that firstly you need to accept that there is a psychological basis for your pain, that your body is not abnormal but is just being unconsciously made to feel abnormal . You should then identify all pressures in your life (old and current) that could contribute to ‘inner rage’ and deal with them consciously to reduce their possible negative effect in the unconscious. He says that accepting that your pain can be caused by the unconscious, and that it is nothing more than a distraction to your inner rage, can lead you to actually allowing your unconscious to release more blood flow to the injured (or painful) parts of your body and allow healing to take place and the pain to subside. This process can actually take place very quickly once you have established and realised the  psychological basis of your pain.

So where do I stand with this view? Well let me start by saying that Dr Sarno’s work is very well researched with lots of examples in his book and I certainly have no reason to doubt his findings. Indeed I have long stated that RSI is partially a psychological issue (but primarily a physical one). He does, however, flip this viewpoint around, albeit pointing out a psychological mechanism for creation of  the physical pain (restricted blood flow to injured areas, controlled by the unconscious) as opposed to just purely imagining you are in pain.

It has certainly led me to reassess my condition and review it from all angles and not to rule out the possibility of having inner stresses causing the restriction of blood flow into my injured arms. I am convinced that the human mind (both conscious and unconscious) does work in many mysterious ways, and wouldn’t rule it out as a potential cause. You certainly have to be prepared to open your mind to any possibilities with RSI, especially as I can concur that addressing the symptoms physically has done no long term good for me.

I do recognise, however, that we as humans are all made differently and, as a result, we will respond to a (TMS) mindbody approach differently. In the case of RSI, whatever you find that works is indeed the best solution for you and, let’s face it, the (TMS) mindbody option costs a whole lot less than endless physical treatments. If I achieve any results with this approach you will be the first to hear about it, in the mean time, it may be worth giving it a try…..