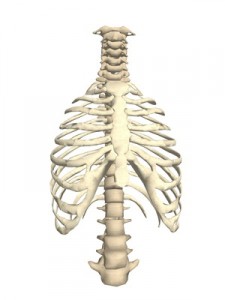 For the past 14 months (it seems like a whole lot longer!) I have had another overuse injury/health issue going on. The condition is called costochondritis, which is more simply know as a strain of the sternum (that flat area at the front and centre of your chest where all the ribs join on to). It may also be considered as another form of a Repetitive Strain Injury (RSI).

Up until I injured it, I didn’t even know that there was anything there to injure. I had been working out in the garden carrying stones in a bucket (a large muscle activity involving upper arms, shoulders, core, back) on and off for a day, when I finally sat down and noticed a general ache around the sternum area, as well as everywhere else I should hasten to add! Over the course of the next few days, all the aches disappeared except the one in the sternum. It was at that stage that I realised I’d injured something, I just didn’t know how bad it would be. Symptoms can include pain, tingling and an itching sensation around the centre of the chest area.

Over the course of the following week, I resumed my normal life doing picture framing, but noticed that I could induce bad pain in the sternum area when attempting to push against something heavy. This wasn’t good! At this point I did a little research and found out about costochondritis.  It is an injury to the soft connective tissue between the ribs and the sternum and can take a long time to heal due to the fact that there is not a huge supply of blood circulating to this area. I also got the advice of my GP who said that I just needed to rest it.

For the next 3 months I did my best to rest the chest area, which meant no lifting, pushing or carrying of anything remotely heavy in weight (including shopping bags!). One main difficulty I found was trying to rest the sternum while sleeping. The natural position of the body when sleeping on your side is to have both arms on the bed. This posture forces the sternum to be compressed and as a result does not give the area ample rest during sleep. Having restless nights also doesn’t help matters in this regard. One solution that I found is to sleep whilst hugging a pillow. The pillow has to be a puffed out largish one to keep the chest area open. It has proven to be a very useful method.

After 3 months of resting, the sternum had improved to the extent that I could actually do more. The question was, how much more? This, I found out by trial and error. If I did too much, the sternum would get more prickly, “itchy” and sore. It followed the same pattern every time: perform an activity, followed by prickly, itchy soreness for a few days, then it would calm down and I’d feel better again after a week. The trouble was that this went on for the best part of a year! Even now – some 14 months after the initial injury, I still have to be choosy about whether to try lifting something heavy or not. All in all, this injury has taken a long time to get better, and is one I could most certainly have done without!

This condition has certainly been very persistent, and has been quite frustrating to deal with mentally as well as physically, but after 14 months I am finally feeling like I am getting there. Fingers crossed! 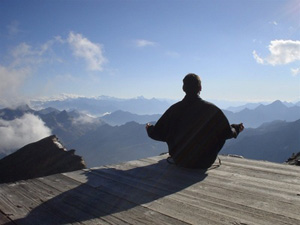 During my RSI awareness presentations I refer to the need for people at risk of RSI as well as those who already experience its effects to adopt physical activities. Yoga is one of those activities that I suggest. Why yoga?

In a nutshell, it combines a fairly physical activity encompassing muscle and tendon stretches from your head to your toes, with core conditioning and balance practices. This is coupled with controlled breathing techniques to allow the participant to focus their mind on the present moment. As well as the physical practice, yoga teaches techniques to promote deep relaxation and the ability to clear everyday thoughts from the mind with meditation. This powerful combination really can address a lot of the factors that lead to conditions like RSI (primarily driven by the overused micro-movements of muscles and tendons coupled with bad ergonomics and stressful working conditions).