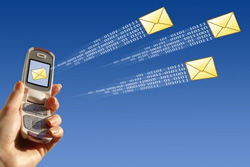 Just came across an old article on mobile phone texting and RSI from 2006. In the article it states that almost 4 million people in the UK are suffering from Repetitive Strain Injuries relating to using their mobile phones for texting.

The UK has a high rate of mobile phone use for texting (we are a nation of texting addicts!), and it is highly prevalent in the under 20 age group. Texting of course is the act of creating a text message on a small mobile device, with either a standard numeric phone pad with alphabetical letters encoded in the pad or a full mini sized keypad with a key for each letter/character. Irrespective of the key count that these small devices have, they all have something in common and that is very small repetitive motion of the fingers and mainly thumbs, in a very confined location.

I first encountered such a device in 2001 when I had my first text messaging pager with tiny full keypad. As an RSI sufferer back then, I was interested to see how it felt to use. Of course being a thumb typing device, it was easier for me to use (since my pain was mainly located in my fingers and arms). However, after a few weeks of repeated messaging, I began to notice pains in the thumbs developing. I also found my wrists aching too. I began to realise that these devices are just as dangerous to use as a computer mouse and keyboard. It hit me then that any small micro-motion using any device for long periods of time has the potential for causing RSI. You are especially vulnerable if you use a computer frequently or indeed have RSI symptoms from another source already.

A lot of people are surprised to find out that RSI is not solely a computer use problem. It can occur in anything that involves small repetitive motions of the hand, fingers and arms. What we are doing these days, however, is maximising our exposure to RSI through the wide array of technology gadgets and their related interactions in our lives. With text messaging (along with the equally addictive computer/console gaming) , there is a whole generation of youth (like this 8 year old girl) who are being exposed to RSI from an early age (and it is the young who are going to be more susceptible to RSI because their bones and muscles are not as fully developed as adults), which could break into epidemic proportions by the time they are older and looking for employment in a highly computerised world.

Phone service providers are also recognising the potential danger. One of them, Virgin Mobile has even got a web site called ‘Practice Safe Text’ dedicated to avoiding text message RSI injuries.

Finally a statistic to ponder (from the linked article, keep in mind by 2008 the figure will be larger):”Each day, almost 100 million texts are sent in the UK”, a large portion of which are non-essential. This staggering statistic highlights the huge potential for problems resulting from repetitive strain injuries.